The party heads back to the Travel Hall to see about meeting back up with Chewlia Jildes to go back to Shade’s Rest. There, a group of mages are at work casting additional wardings and spells on the portals throughout the room. Their warning to Grenkar that Leaf’s must have been taken seriously to have been acted on so soon. As they begin to fade and transport back to Shade’s Rest, the newly enchanted portals and glyphs begin to glow red….

They arrive back at the safe house to find Jovel & Rovel waiting for them. They elect to spend the night at the Safe House, mostly so that Razvahn can get some tips for a leg up on the competition by. 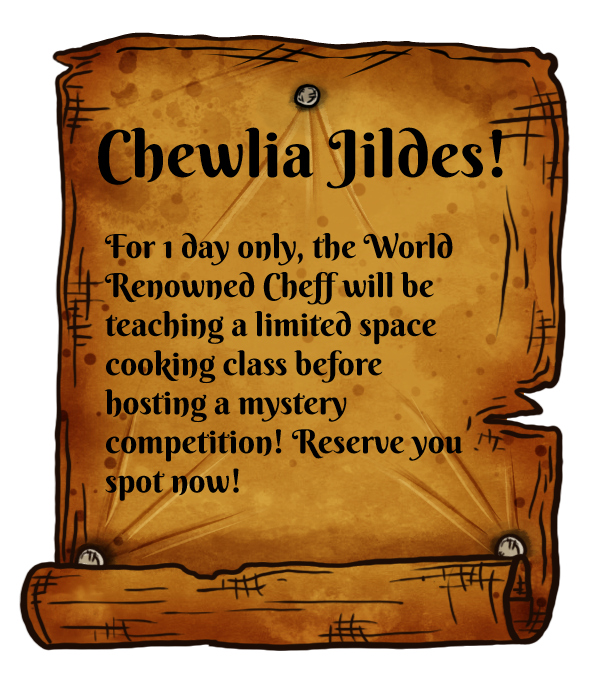 . They’ll have just enough time for the competition before the Rail departs the next day.

In the morning, the crew heads to the cook off. It seems that Razvahn may have been the only one to gain more than a couple Mephits, but the competition is still stiff. The show is a blast! Interviews, festivities and meet and greet with Chewlia and the guest judge, Robby Flayer. It boils down to Razvahn, and the young man that Matchstick lifted the fanny pack from…….. And Razvahn comes in second! The young man’s singular helping of Mephocotti wows even the Shadar Kai, and he wins a new blue fanny pack! Razvahn Is awarded a small pouch of gold and self stirring ladle! They take the winnings then head to the station.

On the platform, they are greeted by jarring news. All across the platform are Rail Marshals and DFK officers warning travelers. It seems that there has been some sort of “event” at Oakdale Estate. There will be no stops from that point between Shade’s Rest and Faxton, and anyone not going far south or to the Beholder’s Bazaar are directed to deport and travel by road. As the party contemplates the news, a DFK soldier pulls them aside, and they see his badge briefly flash the standard agent insignia of the Wall. He tells them that they don’t have any good intell about what happened, and the agents are to take the Rail and find a way to depart near Oakdale Estate.

Their week and a half journey begins uneventfully. After the first few days, the decide to go to the forward dinning car to get a refined meal. Once they enter, the bartender immediately send a waiter over with a note. 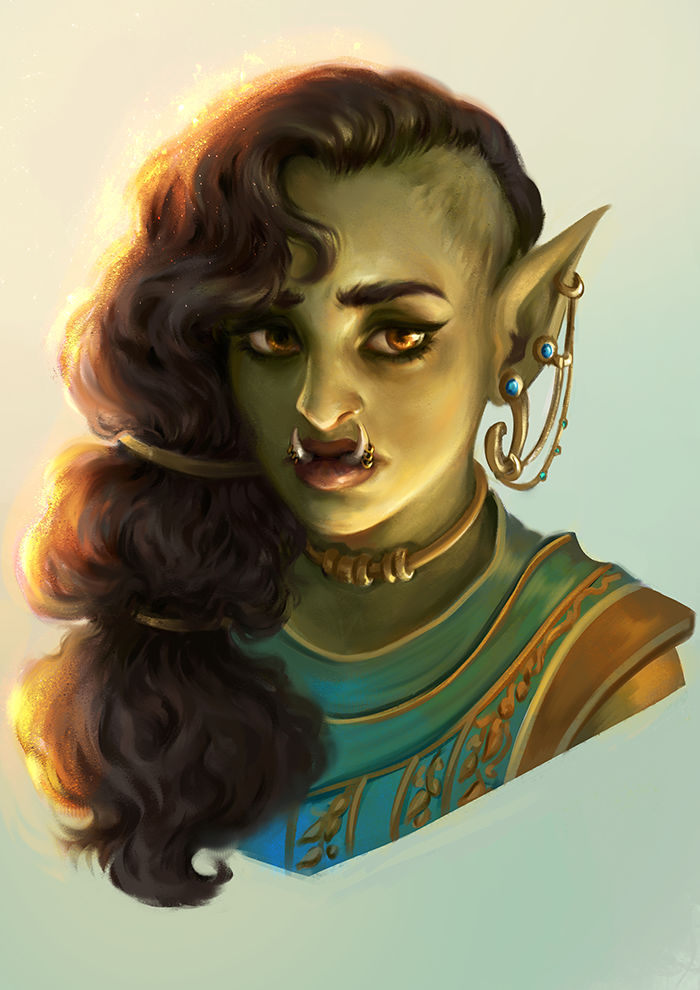 Alisa Gremshin has invited Razvahn and his party to join her in her private car while her brothers are conducting business elsewhere on Rail. They let the bartender know they accept, and after a short time, they are directed to the end of the car, where a mage summons the entrance to the Gremshin’s private car.

She is absolutely delighted to have the company, especially Razvahn’s, and reveals that she is simply along for the trip while her brother negotiate some business dealings. She isn’t usually interested in business, and just convinced her father to let her tag along. The conversation is pleasant and engrossing until Matchstick asks what sort of business her brothers are conducting. When she tells them that they are meeting with a man called The Broker to discuss selling some family land, the party is startled. Razvahn leaps to his feet and demands if she knows of a man named Jared. She tells them that he’s the pleasant man who her brothers have been talking to, and that he took her brothers to see the Broker himself. The party begins to formulate a plan, but is quickly distracted by a commotion further up the locomotive. Leaf realizes that the car is beginning to pitch back and forth, and when Matchstick puts her head out the window, she sees billows of smoke erupting from the Arcane Engine at the head. As the car begins to rock violently, Matchstick throws her Top Hat overAlisa to keep her safe

Not a second later, the entire train DERAILS! With a blast from further up the Rail, and a violent shudder, the whole car is thrown from the arcane track, sending the party flying around a a shower of debris, glass, and blood. When the car finally stops, they collect themselves. Covered in blood, injured, and disoriented, they start to take in their situation. But their efforts are cut short when they start hearing terrified shouts and running outside of their own wrecked car. They climb out on top and take in a horrible site. Staring down the track, they are met by almost a mile of Destroyed rail cars. Some still on fire, some simply crushed and shattered, all of them thrown from the track and irreparable. In the night time moon light and flames from the much of the burning wreckage, the party see battered survivors crowding together and searching thru the destruction for the loved ones they cry out for. But the party catches something more from their vantage point. Among the cries of pain and confusion, terror is rising. Creatures are starting to come out of the woods and attack the passengers! Razvahn quickly climbs to the top of the nearest broken car, and inspire the victims to stand together and fight! The party knows that their decision to stay may cost them dearly, but they cannot leave these people to die.

They rush forward to engage what they realize to be Wire Infected as they start to attack a group of children and noblemen. Their battle is hard fought, and they manage to save the children and their Guard, Charles They make their way further down the disaster to find a terrifying sight. half a dozen soldiers are engaged in combat with a huge bear, and a giant in full plate, wielding a giant sword! 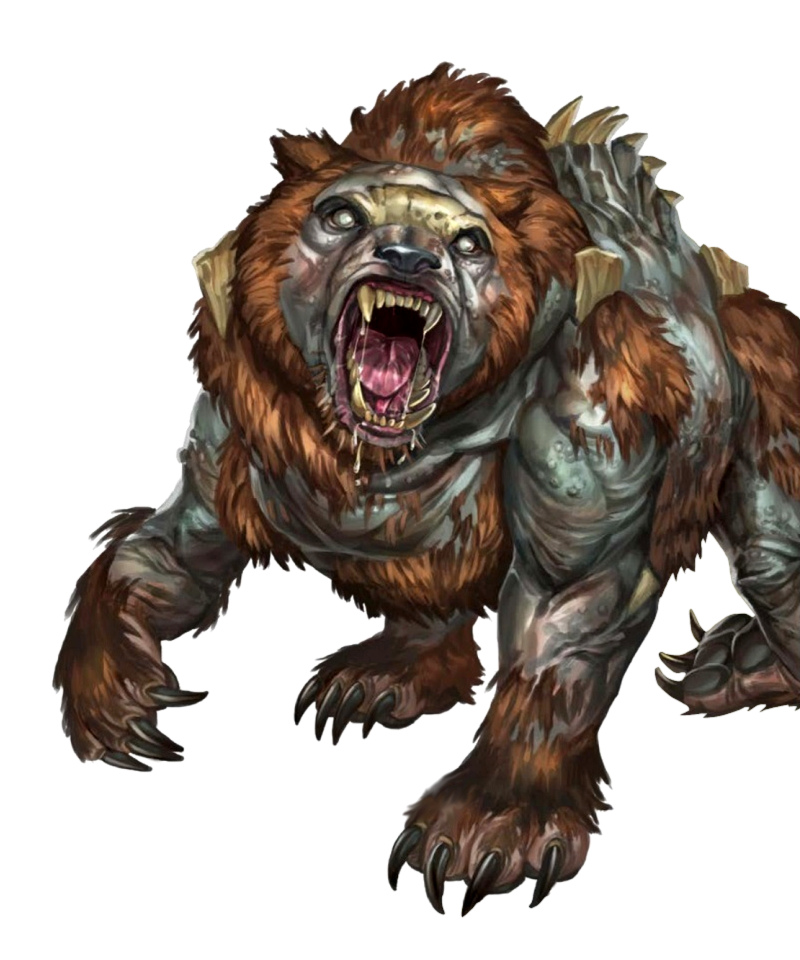 . Both monstrosities have wires growing and undulating around their bodies. The party rushes to engage as the the soldiers are hacked in half or chomped into pulp in single save attacks by the Wire Kin. The fight looks grim until Matchstick plants a Sticky Bomb underneath the giants arm, and Razvahn Shadow Jaunts behind him to strike and set off the bomb! The small explosion destroys its chest and it crumples. Fallon manages to finish off the bear with some heavy spells while Leaf lays down some rapier damage.

Injured, tired, but determined, the party continues its way down the wreckage. Fighting Wire Kin, saving soldiers and innocents the best they can while monsters continue to savage and infect the passengers. As they near their own rail car that originally held their now exploded shipment of Boom Glass, and the equally exploded
Olivia, they are surprised by a familiar figure. Standing atop an overturned rail car is Jared. He holds his two short swords at the ready, and is shirtless. Growing from his body is an almost fur like mat of wires. He slowly raises a sword toward them, then….

Word on the Wall Issue #5