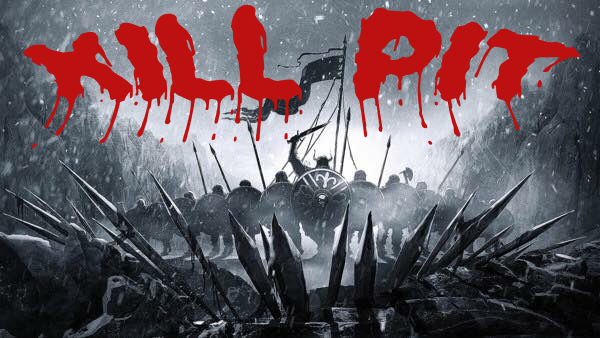 The players appear in a “Lounge”. Comfortable couches and chairs are scattered about a fancy smoking lounge, with snacks and drinks spread tastefully out buffets style along one wall. The others are adorned with racks of weapons of all types, armors of all sizes and shapes, and shelves of potions and scrolls. Above all of the shelves are floating scrying portals and illusionary displays showing the greatest hits and brawls of the game as the logo for Kill Pit scrolls across the images.
A small imp appears in a tattered suit and announces in a cheesy voice, entirely too loud for its small lung capacity, the rules and options:
Battle Royale- Last man standing
Team Battle- Team vs Team combat
Head Hunter- Teams compete to kill the most minion monsters in the allotted time limit
Disaster Dash- Teams try to make it through an obstacle course of natural disasters and events, or make it the farthest
Demolition Derby- Vehicle Combat. One driver, and one “gunner” per vehicle. Different options available
World Ender- All teams cooperate to defeat one big bad monster
All players have their equipment available to them. The Challenging Team may choose weapons or items from the walls first. Item’s properties, limit, types, levels, and availability decided by GM. Their choices then become available to the Standing Team. The Standing Team then gets to choose 1 item in addition to what the first team chose. All players can see what each team chooses, but not who takes it.
After items have been chosen, a scroll appears mid air and unfurls in front of each player. Listed on it are all skills and attributes. Each player may choose to either add 10 points across any of their skills, OR, +2 to 2 different attributes or +4 to one.
At any time, if the venue that is hosting Kill Pit allows it, a player may switch modes to LETHAL MODE for themselves. Any winnings from bets are tripled, but you can actually die, and the other players keep that tripled bet. The venue claims any possessions or coin from a dead player.
Depending on the team sizes, the GM/game may grant one side an advantage or handicap.
As the game starts, your health, your number of spell slots, and chosen items appear in small HUDs in the corners of your vision

Game Play Modes
1d6 for Game Stages
1- Lava Pit – On pillars and platforms rising from the magma. A player that falls in takes a set amount of damage (X)d(X), then reappears on a platform or pillar somewhere in play
2- Unstable Frozen Glacier Pond. With enough impact or force, the ice can be ruptured to create pools of icy water on the field. A player that falls in may make a strength to get out (set by GM). Success causes disadvantage on all rolls due to cold on next round. Not escaping causes drowning- set amount of damage and reappearing somewhere on the field. Disadvantage on all rolls during next turn
3- Jungle Canopy- In the branches and large leaves high above a forest floor. Requires athletics and dex checks to move to certain areas. Falling causes (X)d(X) and you are removed for 1 round as you fall to the ground. Reappear at random spot
4- Desert Sands. In the ruins of a desert temple. Take (X)d(X) per round if you do not move away from the same spot as the sands burn you. Forcing a creature/player into a SAND TRAP causes them to be devoured by a sand lion. Instantly out of the round
5- Collapsing Cave- Take (X)d(X) damage from falling debris every 3 rounds if you are restrained or unable to use a reaction.
6- Rocky Shore- Combat takes place on the wet rocks of a violent beach. Being swept or thrown off the rocks causes (X)d(X) damage, and you are slowed and can only take one action in a round.
These settings are subject to increases of danger, difficulty, or cosmetic/mechanic changes as combat continues. Effects decided by GM

Head Hunter- A team agreed number and type of minions are placed on the field of combat. A count down timer is put up, or a running timer is started at the beginning of the game. The count down timer sounds at the end to signify the event is over. The running timer goes until each team has defeated all minions. All attacks, physical or magical, are granted the cleave ability. Game Mode requires a roll for Game Stage location

Disaster Dash- Teams compete to see if their player can make it to the finish line, or the furthest before death, in a catastrophe filled race
Each round, a team member will roll a d(X) to see how many challenges they will have to face. Then they roll on the Disaster Dice to see what they have to deal with
d8 to decide what it is.
1: Lightning- dex save X, (X)d(X) lightning
2: Magna Spout: Con (X). (X)d(X) magma. pass is half damage. by 5 or more is no damage
3: Wind: strength (X)- move normal. moved back 30 ft if fail
4: Harpy/nymph/siren call: Will/wisdom (X). fail is no movement because of distraction
5: Exploding earth: Dex (X)- (X)d(X). 5 or more no damage
6: Legion: a horde explodes from the earth: charisma (X) to scare them off or inspire them to fight/run with you. Half Speed if successful. (X)d(X) damage if failed and no movement
7: hail: con (X)- disadvantage on next roll as the freezing sleet slows you
8: Clear path

Demolition Derby- Teams select vehicles head to head combat. One driver and one “Gunner”. Other may ride on vehicle, but cannot operate the controls. Attacks are made with their own modifiers. Monstrosity granted only to a team that has 1 player. They can both steer and operate the weapon on their turn. Game Mode requires a roll for Game Stage location.
Cars have 150hp. Half speed and disadvantage on attacks when at 1/4 health. Drivers and gunners have half cover. Spells and attacks do half damage to vehicles
Wrecker: Tank with a huge ball. Does 1d20 damage.
Tank: Large Boom Cannon. 2d12 blast damage
Bulldozer: Giant shovel does 2d12 melee only. But locks opponent so they cant move till next turn
Logger: Giant buzz saw on front. 1d20 damage melee only.
Monstrosity: 300 HP. 1 cannon does 1d20, Wrecking ball does 2d20. mandibles grab and immobilize on a grapple.